The History of The Gunpowder Mills

The History of the Gunpowder Mills

In 1626 the mills were established by the East India Company at the dam which carries the modern Blacksmith Lane.

In 1636 Charles I financed expansion. To stop flooding of the hop fields a second dam was made on the upstream end of the mill pond, giving it the rectangular form still seen today. The millstream was then directed into the north side of the pond. More mills were built down the valley at what was now the Lower Works. New Upper Works were built at Postford Pond 1.5km upstream.

The Middle Works were built in 1652 during the First Dutch War. They were on a New Cut from just below Postford to the south side of the mill pond at the Lower Works.

In the late 17th century there were some eighteen water-powered stamp mills for incorporating gunpowder, plus ‘coal’ (charcoal) and ‘brimstone’ (sulphur) mills for grinding these ingredients. The third and major ingredient of traditional black gunpowder is saltpetre.

The Upper Works closed at the end of the 17th century and the Lower Works became paper mills in 1704. The Middle Works continued as a gunpowder factory but the service and materials processing areas remained on the west side of Blacksmith Lane until the mills eventually closed.

In the 1730s stamp mills were replaced with edge-runner mills. Many runner stones, and one bedstone, survive.

In the 1860s new steam-powered mills were built and the works began to expand eastwards up the valley again.

An Anglo-German company bought the mills in 1885 to make brown powder, which made less smoke than traditional black powder. New incorporating mills were built near the lane to Lockner Farm.

In 1892 a new ‘smokeless powder’ factory was built at the east end of the works to make modern explosives, in particular cordite.

In the First World War the Admiralty built another cordite works south of the 1890s factory.

The works closed in 1920, after the war had ended. Much of the site is now protected as a Scheduled Monument. 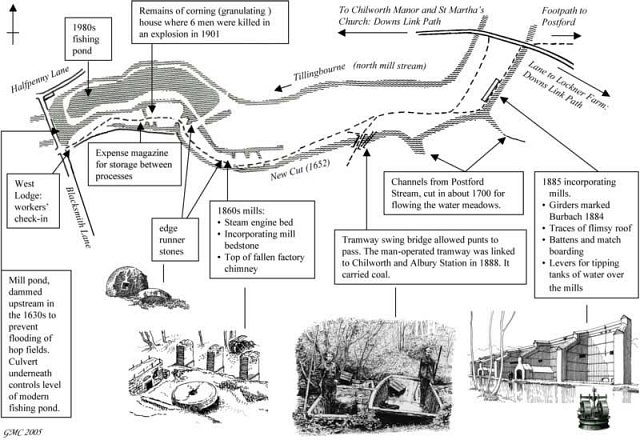